A proper paint job is all about surface preparation; the actual painting takes just a couple of hours but the preparation can take weeks. And if you don't prepare the surface correctly, your lovely paint job will be ruined - you'll have to scrape it all off and start over again. Aside from the time and labor required, primer costs more than a hundred dollars per gallon, and paint is about $80/quart - so a screw-up from lack of attention or cutting corners can be expensive. 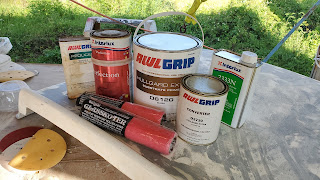 After sanding off the old paint, I washed down the topside and deck/cockpit surfaces with Tide detergent applied with a deck wash brush, followed with a thorough rinse using a high-pressure washer, and then wiped it all down with alcohol applied with multiple clean paint rags. The goal was to remove any surface contamination that could interfere with the primer bonding properly to the surface.


Some people use acetone to wipe down the surfaces prior to priming or painting, however acetone evaporates far too fast on a hot, sun-baked hull, so I use alcohol instead. You have to use multiple clean rags too, otherwise you'll end up just spreading the contamination around instead of removing it. Also, there can be no moisture (dew) on the surface prior to applying the primer and paint, and don't touch the surface with your bare hands either since that will transfer sweat and skin oils to the surface, which will require another alcohol wipe-down.


Then I applied Awlgrip Hullgard Extra primer to the topsides and deck/cockpit, using 9" Glasskoter 1/8-nap roller sleeves. Hullgard Extra is a bonding primer, intended to be used before fairing. It contains extra epoxy, to make sure it binds well to the surface it is applied to. One gallon was just barely enough for 2 coats on the cockpit/deck. For the topsides, one gallon was enough for 3 coats per each side, and just barely enough for 2 coats on the stern and one coat on the rub rails.  So that added up to three gallons of Hullgard Extra in total.


I panicked for a few hours because the Hullgard Extra had not really hardened after 24 hours. You could still put a dent in it with a fingernail. I was convinced I had screwed up the mixture ratio. Hullgard Extra comes in a gallon base plus a quart converter. According to the Hullgard Extra technical data sheet, the mixture was supposed to be 10:1.5.  I just poured the converter into the gallon can and mixed them up with a paint paddle attached to a drill, without a second thought to the proper mixture ratio, assuming that the converter/base kit arrived pre-measured for the proper ratio.

But when the primer had not hardened, I assumed that it was because my quart-to-gallon mixture was of course quite wrong. There are 4 quarts to a gallon, so I thought my mixture was 1-to-4 instead of 1.5-to-10. I started planning on scraping off the entire coating though it just didn't make sense to me that Awlgrip would sell so much more converter than necessary per gallon of base. I re-read the labels on the cans more carefully: while the converter can boldly states to be "One US Quart" it also said (in parenthesis) "1.05PT/.493LT". In other words the "One US Quart" converter was actually about half that amount. Similarly, the "One US Gallon" base was actually "3.785Le" ("Le" meaning liters, apparently). So the mixture ratio was correct after all, straight out of the cans. Awlgrip really needs to do a better job labeling the volumes of its product contents.


Anyway after 36 hours, the Hullgard Extra was hard enough to be sanded with 150 grit. That took one day per side, and two days for the deck/cockpit due to all the inside corners and details that had to be hand-sanded.

Fairing was next. The topsides came out quite fair; the problem areas were mostly around the area where the rub rails were located. I lightly filled-in those problem area with 3M Premium Filler and sanded it all smooth. I wasn't as concerned about fairing the deck because the anti-skid paint will hide most of that; I paid more attention to fairing the cabin sides and vertical surfaces of the cockpit which will not be covered with anti-skid.  There were a few pinholes and  other areas where I had sanded through the Hullgard that need some attention. Fairing only took a couple of hours in total.

I then applied two coats of Awlgrip Highbuild primer to the topsides and sanded that down with 150 grit. The Highbuild Primer was supposed to be white but it actually came out a little tan. That was actually a good thing because the contrast with the underlying white Hullgard shows the few spots where I had burned through the Highbuild by sanding too much. A two-gallon kit of Highbuild was enough for 3 coats on each side on the topsides.

I am now waiting for the delivery of some more Highbuild to prime the deck/cockpit. I plan on applying three coats for the vertical areas that will remain smooth with no anti-skid applied, and 1 or possibly 2 coats on the rest of the areas.

This whole process of removing the old paint and priming has taken about a month of sanding. Needless to say I am getting sick and tired of it. I am using a 5" Makita random orbital sander on the vertical surfaces because it is much lighter than the 6" Bosch, which I use on horizontal surfaces. I've figured out that the sanding process goes faster if you change the sanding discs quite often instead of trying to force a dull paper to last longer. Inevitably that leads to leaving scuff marks that will need to be faired.

Approaching the sanding process in a systematic, section-by-section method also helps, so I broke up the areas to be sanded into approx. 4' square sections and used 2-3 discs per section. Guide coat is useful to show your progress, it helps keep track of the areas that still need to be sanded versus areas that have already been sanded. The goal was first to remove the stipple-marks left from the roller, then to go over the entire area to make it as smooth as possible. Guide coat also shows any major indentations that require more attention but I'm relying on the Highbuild to take care of most of the lighter indentations and smaller pinholes. I used the SEM spray-on variety of guide coat, but later switched to Mirka powder form. It is hard to get an even coating using the spray type because I am not working in an interior space protected from wind which blows away the spray. A little of the powder guide coat goes a long way, but dropping it causes an unholy mess.


Once the Highbuild primer is applied to the deck/cockpit, and sanded down, I will apply the 545 finish primer and sand that down with 220 grit to 320 grit, Then, I will start the painting process. Hopefully that will be by next week, weather permitting. I expect the application of the KiwiGrip non-skid to take a couple more days, and so painting should be done by mid-August, at which time I will start on rewiring the mast, installing the stanchions, painting the locker lids and companion way hatch, and installing teak over the coamings. I will also be redoing the standing rigging in August, using Hayn fittings. Winches, cleats and other deck fittings will be installed after the mast is raised, about the time the boat goes into the water, which hopefully will be by the end of November.
Posted by SV_Whimsy at 6:54 PM