Before I put away the anchor chain that was delivered yesterday, I decided to go ahead and mark the chain lengths every 50 feet with bright fluorescent paint so I can tell how much anchor chain is deployed when anchoring, roughly. 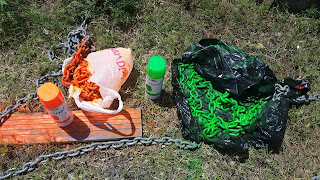 There are a variety of ways of marking your chain lengths but really the most practical is just  to paint the chain every 25 or in my case 50 feet. The paint won't last long as the water and sand will remove most of it off the outside of the links but small patches in between the links will last longer and are sufficient to provide a visual indicator of the anchor chain lengths being deployed. 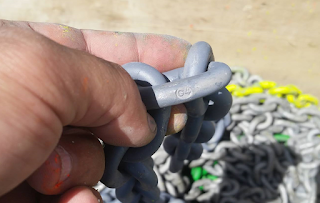 The previous anchor chain was just a few feet of BBB grade chain. I have switched-up to G4 grade chain which should last a bit longer. 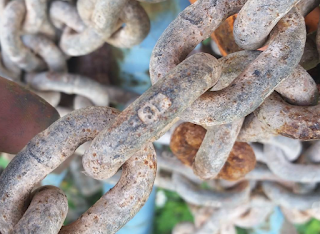 I took advantage of Defender's warehouse sale to update my ground tackle.  My newly-built and quite spacious anchor locker has room to store some serious tackle, and after surviving through two hurricanes (plus a near miss) in two years has convinced me to get the heaviest-duty ground tackle I can fit on Whimsy.

Whimsy's original ground tackle, consisting of a Bruce claw-type anchor, a few feet of 5/16th chain and about 100 feet of 3/4" three-strand, and a Lofrans manual windlass, was more than sufficient for the sort of easy coastal cruising she was used for by the previous owner. Since Whimsy only draws 3' 9" with the centerboard up, it is easy to anchor in quite shallow areas off-limits to most other cruising vessels too.

This set up was fine for gunkholing in the Bahamas and Keys but more distant anchorages are not nearly as shallow and easy-to-anchor so I decided to get some serious ground tackle suitable for a long-distance single-handed cruiser.


First, the windlass: Anchoring single-handed is hard enough without having to try to wrestle with a manual windlass. I decided to go with a Lewmar H3 horizontal windlass with a chain gypsy and a drum.  I am not a fan of vertical windlasses for a variety of reasons, and I don't think the under-deck mounted motors are really much of an advantage than the sealed units mounted above-deck, corrosion-wise. The Lewmar H3 is a well-regarded and established model, that came with its own remote switch too. The weight wasn't thst much more than the manual windlass, and once the chain is moved to the bilge before departing on long-distance voyages, I don't expect there to be much of a difference in performance caused by the weight of the new ground tackle.


Updating to a power windlass, means I can upgrade the anchor rode to take the best advantage of its pulling-power, With an estimated max pull power of about 1700lbs, the Lewmar H3 allowed me to move up to 200-feet of 5/16th all chain rode. The deepest anchorage I expect to use in the Bahamas and Keys is no more than 15 feet deep, and adding 5 feet to that from the waterline to the deck, plus a favorable 7-to-1 scope when deploying the anchor, means that I can expect to use 140 feet of the chain, with 60 feet in reserve, max. More likely, at 10 feet depth and a more usual 5-to-1 scope, I would only use the first 75 feet of chain only. But in other places in even the Caribbean, never mind the PNW, anchorage depths can very easily be more than 50 feet. So in addition to the chain, I have 300 feet of 5/8th 8-plait line. That combined with Whimsy's shallow draft, should suffice to keep her anchored safely in a blow and allow me to rest more comfortably.


I went with G4 hi-test chain (which is not the same thing as high tensile) - Peerless Acco-brand chain, to be specific. I'm hoping the galvanization of the brand name chain will hold up better than cheaper, no-name windlass chain. The weight of 200 feet of 5/16th chain comes out to about 210lbs. Combined with the 44lb Rocna Vulcan anchor, that comes to a total weight of say 250lbs, comfortably within the Lewmar H3's pulling capacity.


I also got a Rocna Vulcan 20 anchor, hoping that it really does set as quickly as widely claimed. At 44lbs it is a little over-sized for my boat according to the Rocna anchor sizing chart but only by 10 lbs and frankly a heavier anchor is more secure, all things being equal. Anyway it is about the same weight of the existing Bruce which I will keep as a backup, on its old rode which still has plenty of life left.  Combined with my Mantus storm anchor (which breaks down for storage) and the Fortress stern anchor, I think I have all the ground tackle a proper cruiser should have.

What's left? A proper snubber bridle, and bow cleats. And installing the bowsprit  with rollers suitable to the new anchor...