While sanding the bottom, I had the chance to investigate a crack in the fiberglass where the rudder shoe would be located under the keel. I was concerned that the crack may be a sign of corrosion in the bronze rudder shoe, which is typically protected under layers of fiberglass.

Sanding away at the epoxy barrier coating near the rudder, I discovered two things: first, the rudder shoe is fine, with no corrosion. There are a few small voids in the fiberglass filler around it, which I will fill-in before glassing over the entire rudder shoe once again.

Second, as I was trying to sand out the last remaining patches of stubborn antifouling, I discovered that the previous owner (or more likely someone he hired) had put epoxy barrier coat over the red ablative paint on the rudder.  Not sure how it managed to stay on for so long. I will have to sand the epoxy barrier coat off entirely.
Posted by SV_Whimsy at 5:16 PM No comments:

One of the benefits of the new yard location for Whimsy is that we're allowed to do our own bottom-jobs. Needless to say the red ablative anti-fouling on my boat had long expired and needed to come off. I also wanted to check everything under the waterline, to make sure there were no hidden surprises under the anti-fouling, and to take care of a couple of projects including checking the rudder shoe.

Options for removing old antifouling are: sanding, stripping with chemical stripper, or blasting (usually with something relatively soft like walnut shells, to avoid damaging the gelcoat underneath the antifouling). Since blasting was not allowed in the yard and I wasn't a sucker for punishment, I decided to try the paint stripper option.

I bought pail of Peel Away paint stripper from the local hardware store (about $50/pail), and tried a test patch on my hull. This material is basically drain opener chemicals but in cream form, which you trowel onto the hull. Cover it with the paper/plastic sheets provided, tape the sides to make sure the stuff stays moist for as long as possible.

The area around my boat was an environmental disaster, flooded with several inches of orange-colored slurry. And once it all dried, the antifouling turned into dust and settled on everything including my car. Yet this is normal in the yard, and worse has been happening for several decades since the Navy owned the place. I suspect this is where I will catch cancer.

WARNING: Peel Away is highly corrosive so I suggest taking all the necessary precautions (especially eye protection and gloves.) A little bit of it was accidentally smeared on the inside of my wrist, under the glove, and now have a scab there. I'd hate to think what could happen if even the dust from the dried-up material got into anyone's eyes - so I suggest not only eye protection but also keeping a water hose nearby and handy as an emergency eyewash station.

The stuff I used was the regular hardware store version of Peel Away that comes with a plastic spreader, some pH testing strips, and the plastic/paper sheets used to cover the area being treated, and a packet of neutralizing powder (which I suspect is a mild citric acid. Vinegar also works.) Peel Away makes a "safe" version for use on boats that won't damage underlying gelcoat, which I also tried. (Since my boat had an epoxy barrier coat under the antifouling, I wasn't worried about gelcoat damage using the regular stuff.)  The "safe" marine version is slightly runnier, so you need a better trowling technique especially on the upside-down surfaces of the keel to avoid plopping it all on the ground. They were both equally effective.

The spread the material, I used a notch trowel with 1/4" notches. First, I smeared a heaping of the stuff on the trowel using the provided plastic spreader. Then I smeared that on the surface of the hull using the straight edge of the trowel, much like smearing butter on toast with a butter knife, spreading it all out as smoothly as I could until a patch on the keel about the size of one of the plastic/paper sheets was covered in stripper. I scraped the notched side of the trowel across the patch, leaving 1/4" high streaks or lines of stripper running horizontally. I then knocked down the straight lines by moving the spreader lightly vertically across the lines, to even it all out. Finally, I covered the patch with a sheet of the special paper/plastic provided, gently kneaded all the air pockets out from under it, and taped the edges of the sheet to prevent air from drying out the stripper too soon.  Left over night, the stripper was mostly dried especially in areas where it was applied thinly. The paper and tape was removed, and the stripper was scraped off. The rest was washed off with a power washer.

I had to buy 6 pails of Peel Away to complete the project but in the end I got a nice clean hull with no sanding. Of course, then I had to sand it all with 80 grit in preparation for the new coat of barrier paint. While sanding, I occasionally accidentally went through the old barrier coat and got to see the gelcoat underneath, which while crazed was still in decent condition. There's no sign of pox or blisters; boats as old as Whimsy generally didn't have problems with blisters. I figure, if there was going to be osmotic blistering, she would have shown it by now. However a couple of extra coats of epoxy barrier coating comes next.

Also, while the antifouling is gone, I want to check out the rudder shoe and investigate a worrying crack in the fiberglass around there.

The boatyard where I started working on Whimsy has decided to gentrify, cater to big fancy catamarans and open a seafood restaurant. Needless to say DIY-type liveaboard types were no longer welcome and we were given a deadline of Nov 30 to leave the yard. Which is too bad because it was a great location, very centrally-located to all the stores I regularly visited plus relatively close to my storage lockers where I keep my tools and supplies.


Unfortunately the new yard is not nearly so well-situated, though only 30 minutes West of my previous location. The nearest store is a 20 minute drive; the nearest hardware store is an ACE branch that is not really adequately stocked compared to the large Lowes and Home Depot I used to visit, and getting to my storage unit is a pretty long drive. Not to mention the new yard is almost twice as expensive and the boats are jammed together quite tighly (that may resolve as more of the snow-bird Canadians splash their boats soon.) 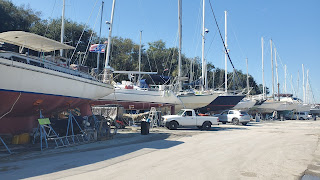 On the more positive side, the new boatyard is obviously more oriented towards the DIY crowd. There are grizzled old snaggle-toothed guys here who look like they've been working on boats their entire lives. Actually some of the boats here look like they're pretty permanently on-the-hard too. Yet there are plently of cruisers -- lots of Canadians -- who are working diligently on their boats from early in the AM when the rooster crows (yes, there are chickens and ducks running around too) 'til dusk and sometimes into the night, sanding and polishing and painting things. It reminds me of the mothership scene in Water World, the post-apolocalyptic movie with Kevin Costner.

But I see all this as just further encouragement to get going and finish up my project.

More importantly, this yard allows people to do their own bottom-jobs (though no blasting) so that allows me to save a lot of money rather than having a yard do it. The estimates I was hearing were well over $2500. The cost of the move to the new yard was $1400 but apparently most of that is in the loading/unloading of the boat, the mileage itself is quite reasonable. That means that I could have kept going south to a boatyard that was a in a warmer clime  - and I may still do so, since I can't paint the boat with the average temps around here for Jan and Feb. On the other hand, there are enough other  projects to keep me busy until the weather warms up.
Posted by SV_Whimsy at 4:29 PM No comments: