Manual coffee grinder on a sailboat 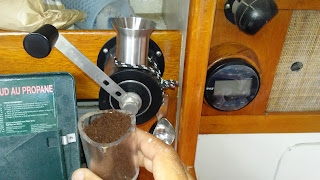 Anyway so if you like freshly ground coffee as I do, on a boat, the options are limited to using an inverter to power an electric grinder -- and a coffee grinder doesn't really burn a lot of power -- or using a manual grinder.

The problem with the manual grinders are that they require two hands to operate, except for the wall-mounted ones which instead are usually very large and ornate pieces with glass bits that would never safely fit on my boat. On a boat, you need at least one hand to hold onto something, so you rarely have both hands available to make coffee.

However I was lucky to find this particular grinder on Amazon, and thus far I'm happy with it but for a single issue: the little bowl that receives the coffee below, attaches to the body of the grinder only with magnets. This means that the slightest bump of the finger and the receptacle and ground coffee it contains goes flying everywhere. I wish instead of magnets, the receptacle was screwed-in. Anyway that's my only problem with this grinder. The receptacle is perfectly sized for a single cup of coffee in  my shatter-proof coffee press. The aluminum body can take the humidity of the sea as can the ceramic blades. It grinds coffee pretty fast too, I haven't counted the turns but It doesn't seem to take much more time than using a regular coffee grinder.
Posted by SV_Whimsy at 11:02 PM 4 comments:

As indoor NYC pets, my cute kittens had turned into rotund walking fury cushions that just laid about doing nothing but shedding. They didn't know what to make of the boat. Pasha went out of the cabin to explore at nights, chasing the lightning bugs, but he never left the decktop. Sasha only went out to use the litter box. Two fans constantly blew cool air on them. 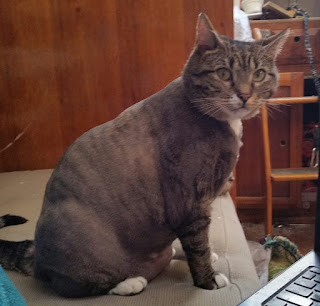 The weird thing was their reaction to being shaved.

First, yes, I bought a pet shaver from Walmart and shaved my cats to help them keep cool in Fla. No, it wasn't hard and didn't require restraining them, they seemed to enjoy it. I had already gotten them used to regular brushing, rough enough to remove what seemed like a woven sweater's worth of fur off of them every day, so the clipper didn't make much of an impact...for her. Sasha had no problem and was actually purring while I shaved her so I was able to do a pretty thorough job of it.

Pasha was a bigger problem, he'd sit still long enough for me to do a patch, then he'd pretend-claw and growl a bit, turn around and come back again. He only kinda like-hated it. So he was a little patchy in the end.

The problem was that after this, they seemed to no longer recognize each other. They started hissing and scratching. They went into hiding, each at one end of the boat, eyeing the other one suspiciously from under a bunch of stuff on from on top of a shelf. 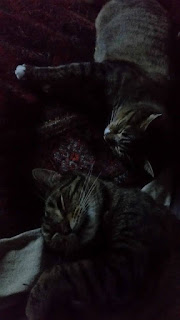 I knew things were serious when they fought over the food bowl. Normally, he would stuff his face in the bowl first, gulping what he could. She would wait patiently for a chance to eat her bit, until he pushed her aside again. That was the order of things, it wasn't fair but it kept the peace. Now, they literally fought, hissed and scratched, sometimes both left the food bowl untouched and ran off to hide in their secret spots. Gradually, she came to have the upper-hand over the food bowl, actually.

Anyway, turns out this is a thing that cats do when they're shaved, bathed, taken to a vet, or otherwise separated for a while: they forget each other's scent. Cats are not known for their loyalty.
It took about a week before things were back to semi-normal.

Anyway, after a month, they were pretty much all done with all that. They took turns sitting on my lap on the long slow drive back up to NYC. The process of introducing the cats to the boat was going to go slow. 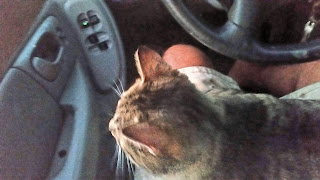