Installing the windlass and spurling pipe 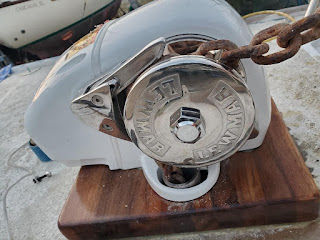 I went with a Lewmar H2 windlass with a gypsy and capstan combination. There are many pros and cons for vertical or horizontal windlasses as well as as above deck and below deck ones. Horizontal, above-deck windlasses are just easier to deal with as far as I am concerned. It is a pretty substantial piece of gear, both in terms of size and weight. It can pull at least 1000 lbs, so it should be able to handle the weight of my Rocna Vulcan 40 kg anchor and 250 ft. of chain (just about 300lbs including the swivel.) My complaint about the Lewmar H2 is the cost of additional "optional" manual re kit, over, which is actually pretty much necessary so add on another $500 or so to the cost. 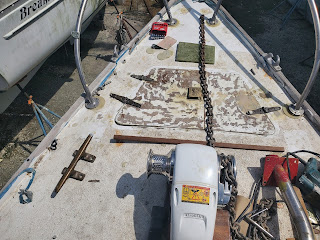 The location of the windlass installation was a bit of a problem because cause Whimsy has a teak anchor roller platform which extends aft from the bow for about 2ft, then there's a few inches of space followed by about another 2 ft. of space taken by the new anchor locker lids. So the windlass is mounted about just about 4 ft from the bow, aft of the anchor locker. This meant I had to split the anchor locker lid into two opening parts, in order to allow it to open with the anchor chain passing above it. I actually prefer this arrangement over having a one-piece lid which would be bulkier.

The windlass is therefore located on the foredeck about 4 ft from the bow, which puts it over the v-berth in the forecasle area which is particularly prone to leaks (the foredeck a boat is pretty wet when sailing, as waves break over the bow with great force.) Since a soggy v-berth mattress is about the worse thing there is to sleep on, I would have preferred not to install anything over this part of the foredeck at all,  but choice have to be made (locating a heavy piece of gear further aft has advantages in better sailing performance too.) I am just going to have to live with deck penetrations for the bow cleats and windlass over the v-berth and do my best to make sure they're installed well so they won't ever leak! 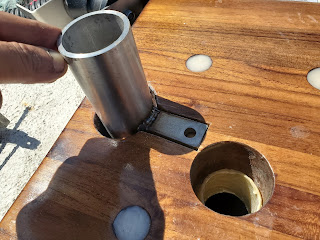 So aside from the leak issue, there was the question of how to get the anchor chain to feed into the anchor locker, which is separated from the v-berth with a bulkhead. There used to be a little hatchway in the bulkhead to allow access to the anchor locker from below, but I sealed that up when I cut a new anchor locker opening on the decktop instead. 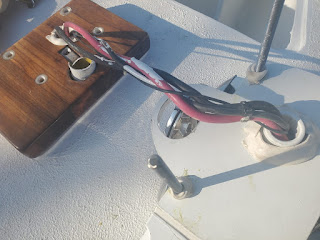 My solution was to make a spurling pipe  (not to be confused with a hawse pipe) shaped with a gentle curve that feeds the chain from the windless on deck, down past the v-berth interior space, past the bulkhead and into the anchor locker. 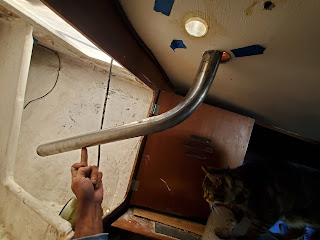 Designing the spurling pipe and its installation took some doing, as there are many variables. For example Lewmar recommends at least 1 foot of drop from the windlass for the anchor chain to be able to self-feed under its own weight, and yet I also had to make sure the outlet of the spurling pipe was high enough in the anchor locker to prevent the chain from castling. A few dry runs with the old anchor chain showed that it chain slides through the stainless steel pipe, and a gentle curve starting from about 8"that terminates about 1 ft from under the windlass, proivded enough drop for the chain to fall through the pipe easily under its own weight. This location also provides another 2 feet or so of vertical drop inside the anchor locker, which should be adequate to prevent the chain from piling up too much. 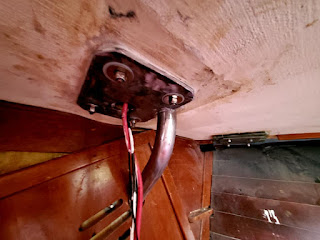 The spurling pipe is made from heavy-gauge 316 stainless steel, with a 2" diameter. It has a has an approx 5" flange plate that I had welded on, that secures it to the bulkhead with 4x 11/2" bolts through the bulkhead. I had a tab welded (badly) on the pipe lip on decktop after installation, thus securing it from both ends. On decktop, the spurling pipe lip is located just under the windlass gypsy so the chain falls into it neatly. In the anchor locker, I placed a roller in front of the pipe opening, so the chain can easily slide in and out of the spurling pipe with minimal wear and noise. (I made a curved part from aluminum, used to make sure the chain doesn't jump out of the roller.) I painted it with anticorrosion paint though technically stainless steel doesn't need it; exposure to air is what keeps it rust-resistant. 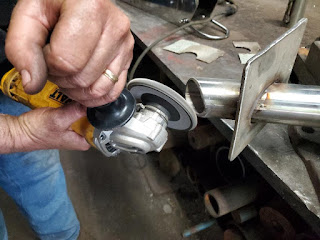 Others have used PVC pipe for similar spurling pipe arrangements but it seems to me that steel chain (covered with bottom sand too) will quickly wear through PVC. Also, some have arranged for the spurling pipe to feed into the locker underneath the v-berth rather than into the chain locker, this moving the anchor chain weight farther back. I decided against this because I didn't want to lose the foot space in the v-berth and I have other plans for the storage area under the v-berth. I plan to move the chain even further back into the bilge in preparation for long transits anyway.

Lewmar requires the H2 windlass to be lined-up just right with the anchor chain, so I had to make a platform or plinth to raise the windlass about 2 inches from the decktop to line it up vertically with the teak anchor platform and the anchor rollers. I decided to make this plinth out of teak, for looks, but I found a 2"-thick cutting board on Amazon.com for less than the price of buying the raw teak. All I had to do was trim it to shape, and seal it up well against the elements. For this, I followed the same procedure as for the teak anchor platform: First, two or three coats of West epoxy with their special clear part B, followed by several coats of Perfection Plus clear gloss varnish (5? enough to create a glass-like surface effect; this is helped by using a heat gun on low setting to blow out bubbles that inevitably form when varnishing.) Though the varnish is supposed to have UV-resistance, this was then covered with 3 coats of sprayed-on Nyalic clear coat, resulting in a tough, UV-resilient and deep clear gloss surface on the windlass plinth (as with the anchor platform.) But before the plinth could be installed, I glassed-in a solid plate of G10 fiberglass, to account for the camber of the decktop. The teak plinth sits on top of this plate.

The Lewmar H2 windlass requires 4x12mm bolts to secure it in place. They helpfully provide the bolts and nylon lock nuts (along with a pre-cut rubber gasket seal to fit under the apparatus) however the bolts were too short for my installation especially due to the 2" thick teak plinth that the bolts would have to pass though, so I had to order some 12mm threaded rod of 316 stainless steel to cut-up my own custom length bolts.  I had to calculate the length of the bolts to make them long enough to fit into the windlass housing body for about 1", then through the plinth and the decktop, then past the filler & backing plate for the windlass below, followed by enough threads to use a washer and locking nut on them ... or about 6" (including a little extra to account for the butyl sealant.)

The backing plate was made from 5/16 aluminum diamond plate. I got it for free, it easier to cut than steel, and it seems plenty strong enough to secure the windlass. Normally I would not use aluminum backing plates as steel bolts in combination with aluminum will result in galvanic corrosion, but this installation was in the dry interior of the boat so corrosion is much less of a concern. I used nylon washer spacers just in case though.

Since the steel bolts were inserted into the aluminum body of the windlass, I made sure their ends were well-covered with generous goops of Duralac anti-corrosion compound.

I also used gob of fiberglass filler when installing the backing plate to flatten out the reverse camber of the interior roof of the forecastle, under the windlass installation area, so the strain from the windlass is distributed as evenly as possible under the deck. 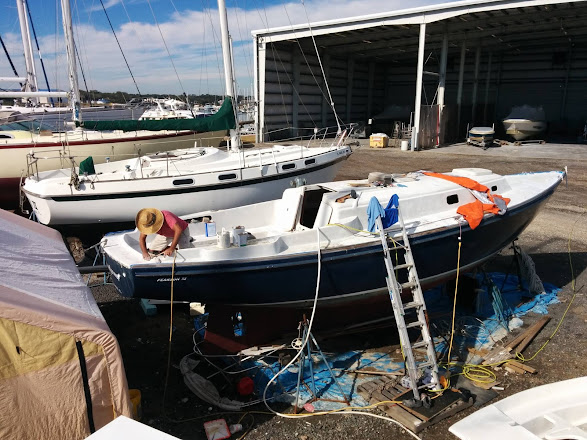 A ladder is useful short-term, but carrying paint buckets, tools and other heavy things up and down a boat 25 times a day using a ladder is an invitation to disaster; all you need is one slip to ruin everything. So I decided to make some stairs put of treated lumber, which could also serve as a tool storage shed and outdoor kitchen space. I was able to knock it out in a day. It isn't perfect but it is safer than a ladder. I overbuilt it of course...the fellas at my previous yard told me later folks were fighting over the stairs I had built but had to abandon there when I moved the boat. Most prebuilt boatyard stairs, if not already being used,  are pretty rusty and dangerous themselves, or they aren't the right size & fit. For bigger boats it is sometimes worth renting commercial scaffolding, which can be built as high as two or three storys.
For my particular project I just want to make sure there was about 2-foot gap separating the stairs from the boat to allow me room to freely work on the hull on that side. I built the top platform as kinda a Frank Lloyd Wright-ish cantilevered bit that provided cover for my outdoor boatyard kitchen located behind the stairs and also served as a ramp to step over the gap between the stairs and the boat safely. Other design features were solid, secure handrails and good lighting in the form of a solar-charged yard light. All this may seem like overkill but staging a project site is actually important, for efficiency as well as safety. 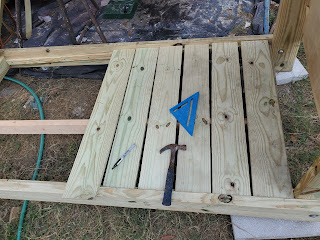 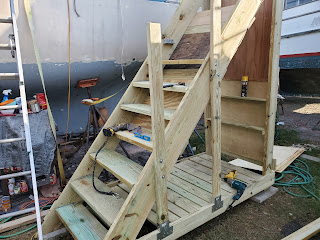 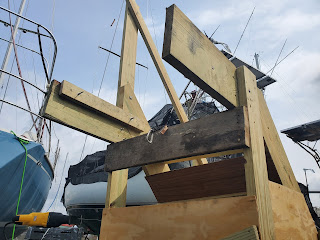 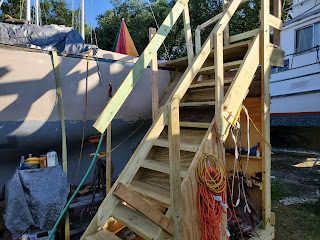 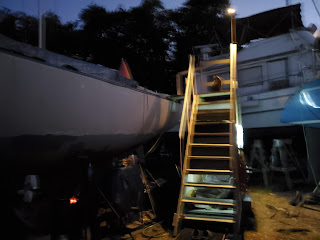 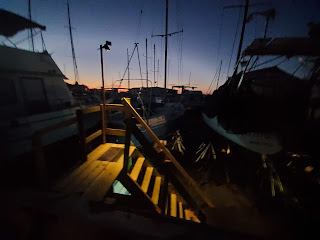