My sailboat has wooden (red oak? definitely not teak) rub rails which were in bad shape and which had to be removed for the paint job. It took some effort to take them off in one piece. My goal was to try to salvage them since making new 35-foot rub rails and steam-bending them to shape was going to take a lot of time and effort. 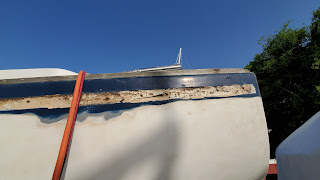 Each rub rail actually consists of two long pieces of wood. The first was bolted onto the hull side, and the second one was glued and screwed onto that piece. (The glue holding the two parts had failed along the way in most places.) The bolt heads holding the rub rail to the hull sides were hidden underneath the second piece of wood, and the nuts were glassed-over on the inside on the hull in inaccessible places. Getting to the bolts without further damaging the rub rails was going to be difficult, but luckily the sealant used between the rub rails and hull was damaged enough that I was able to run a hacksaw blade under the rub rails to cut through the bolts holding them in place. I didn't bother trying to dig out the fasteners; I just ground them back flush with the hull. 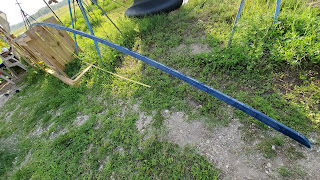 I was able to remove the rub rails largely intact though the wood cracked in a few places along the way. I sanded the rub rails to remove the old paint and sealant, scarfed-in some patches to replace the cracked portions, epoxied the two parts together where separated, and then primed them in preparation for painting. I plan on painting them the same color as the rest of the boat. 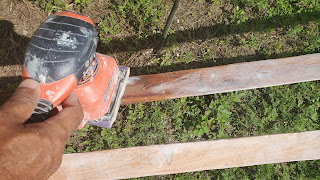