My foredeck hatch blew off in Hurricane Irma in Sept. 2017. That was the second hurricane in 2 years I experienced in St. Augustine - the other was Matthew. When I first bought the boat, the dealer reminded me that there had been no hurricanes there in 60+ years. Well, we got hit by two in a row, but luckily they had both been reduced in strength a bit by the time they blew by us.

I had been working on the deck so I had removed the hinges and lock on the hatch lid, so I put my old manual windlass on the lid to keep it shut through the storm. However due to the camber of the hatch lid and the force of the wind, the windlass gradually "walked" off the lid and fell off. I was laying down on the v-berth cushion at the time and watched as the hatch blew straight up into the air. It fell into the floodwater and floated away (we had about 2 feet of flooding in my part of the boatyard).  I didn't want to go after it because there were all sorts of sharp, pointy things flying through the air. The funny thing is that barely any rainwater got into the boat because the rain was traveling horizontally.


I decided to replace the hatch with a Lewmar Ocean 60, to get more light over the v-berth. While I was at it, I also put a Lewmar Low Profile 20 over the head as I previously wrote, and a Lewmar Ocean 40 under the boom. I had decided to install them before painting the cabin top because I didn't want to have three large holes in the ceiling while working on the boat. 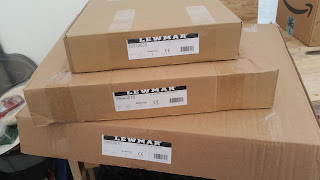 Those two went in rather easily, since they required me to only cut a new opening (for the head) or slightly enlarge the existing hole for the aft hatch.

Installing the fore hatch was a bigger project because I had to make the existing hole slightly smaller (by about an inch all around) and build-up the rim to take the screws for the hatch. Down below, the hatch rim had to also be faired and straightened so that the ceiling camber didn't cause an unsightly gap with the frame trim piece (the hatch frame trim piece has a bug-screen which is handy.) 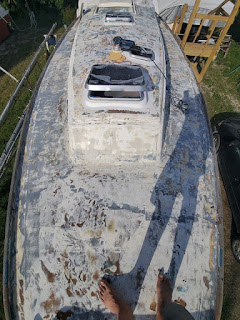 I used vinyl exterior trim pieces purchased from a local hardware store along with epoxy filler to build-up the rim above and below, then spent hours sanding and shaping it. Lewmar Ocean hatches have a pretty high profile so I had to reduce the height of the rim a bit, so the whole thing wasn't sticking up too high like a turret. I brushed just one coat of gel coat beneath the rim to seal it, and didn't bother sanding it smooth because it was all going to be hidden under the hatch frame trim piece anyway. 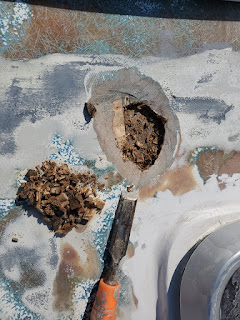 While doing all this I noticed a suspicious, weeping bump on the deck near the hatch rim that turned out to be a small patch of rot, which had to be dug out and repaired. No big deal.

After that it was just a matter of making sure the hatch rim top was as flat as possible to minimize chances of water intrusion, and then screwing down the hatch frame using some butyl sealer and one-inch #10 screws.