While sanding the paint off the transom, I found a faint outline of the original name of the boat: Tingueby, homeport: Chicago. 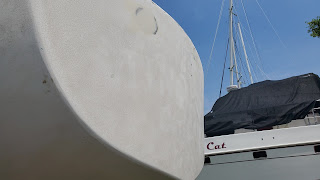 Since that's a pretty unique name, I was able to identify it online as once having belonged to MF Sasgen. Interestingly, the Coast Guard records say that the boat was built in 1968, though my title says it was built in 1967. 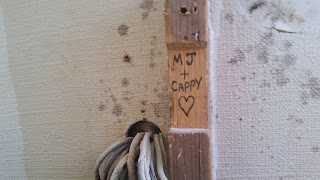 Matthais F Sasgen Jr. was associated with the Sasgen Derrick Company in Chicago, (I'm guessing based solely on the name similarity.) He passed away in 2006 but his wife apparently lives near Port Lucie, where the boat was originally for sale. Other relatives apparently live in St. Augustine too. I sent Mrs. Sasgen a message on Facebook, asking about the boat history, -- when and where it was purchased, what color it was originally etc. -- but I have not yet received any reply. It would be nice to know about the boat a big more, like about the little love note, "MJ hearts Cappy" I found written inside the power distribution panel, or the "Glued in 1978" written in pencil under one of the drawers in the galley.
Posted by SV_Whimsy at 7:05 AM