Starting on rewiring the sailboat mast.

I was hoping to dedicate August to the mast, standing rigging and the stanchions entirely but the weather is not cooperating to allow me to finish the paint job from last month. 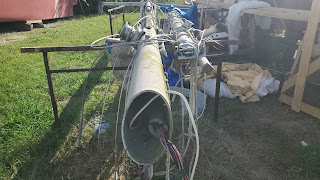 The 40' mast itself is in OK shape, no big dings or anything but it needs a good cleaning with vinegar and maybe an aluminum cleaning compound. I don't plan on painting the mast since that's a lot of work and really not necessary. All the old blocks, shackles and internal wiring will of course be replaced. 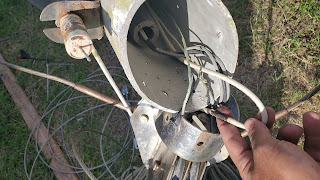 Looking at the masthead: The VHF antenna base was still there but seeing the singed marks on the cable, I assume it was zapped-off by a lighting strike at some point. The masthead light is the old incandescent variety, broken. The windex has fallen off. 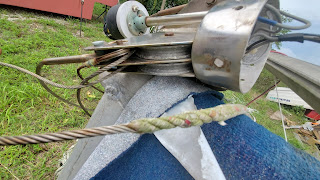 The sheaves in the masthead sheave box are aluminum and seem to be in good shape; I will just need to replace their axle pins. The boat's original halyards were a combination of wire cable spliced to 1/2" cruising line so the existing sheaves are designed to handle wire cable. I have already bought 5/8" cruising line, and was considering changing the sheaves to use all-line rather than cable (sheaves for cable have a groove in them) but now I see switching the sheaves will involve a lot of metalwork on the sheave box (the existing slots for sheaves are too narrow to accommodate the wider halyards). So I'm going to have to go back to the combination cable-line halyards and will be splicing some 7x19 1/4" stainless cable to the line I have already bought. Since I had already bought enough line to run the lines back to the cockpit plus an extra 10 feet, that will leave a lot of extra line cluttering the cockpit - an issue to deal with when the running rigging project starts in a couple of months. 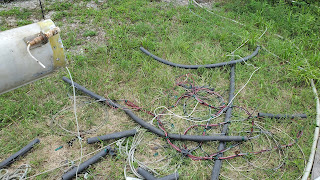 In the meantime I need to rewire the mast too. The mast doesn't have a built-in raceway for the wires; the previous owner had zip-locked the wiring together every few feet and wrapped it all in some foam insulation. I spent some time pulling out the old wiring, which was not marine-grade stuff. There was a big ball of wire, an old bird's nest, some errant foam bits and leaves blocking things up in the mast so I resorted to clearing it all by ram-rodding the mast with 4x10' lengths of PVC pipe until I was able to clear out all the junk plus the old wires. 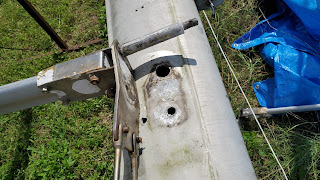 The wires had wrapped around the internal bolts for the spreaders so I had to take the spreaders off, which was a good thing because I got a chance to inspect things and clean off the white aluminum oxide corrosion that had formed under the stainless steel spreader tangs. However the bolt threads had galled, and also I was not able to find replacement fine-thread 1/2" nyloc 316 nuts locally. The spreader tangs are currently at a machine shop so the bolts can be rethreaded, and I have ordered a couple of new nyloc nuts from BoltsDepot.com 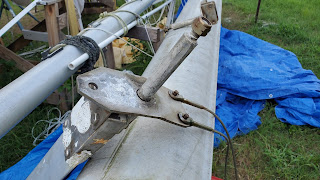 I replaced the blocks for the spreader flag halyard lines with small Harkens. The old Sunfish brand spreader blocks had started to leave chalky residue so I'm guessing they've just about had it. I'll replace the rest of the blocks later, when I handle the running rigging. 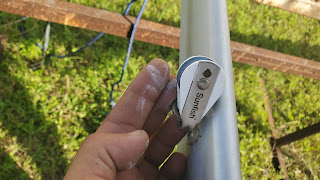 As for electrical wiring, I have bought a couple of Caprera 2 red/white LED spreader lights by Lumitec, to be installed in addition to a steaming/deck light. I will also need to wire the new VHF antenna plus the radar dome and the Echomax XS active radar reflector. 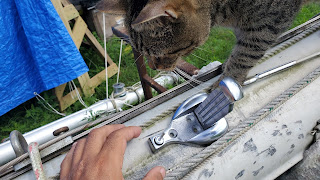 Mast steps are another project - I will be installing folding aluminum ones by Sea Dog, and using 1/4" aluminum rivets to secure them. I know that some insist on using Monel rivets but I don't have a rivet gun capable of handing steel rivets, and three 1/4" aluminum rivets per step should be strong enough anyway (no issues with corrosion that results from steel-aluminum contact either.)


Meanwhile, I'll just watch the dragon flies and hope for better weather... I have to remind myself this is all supposed to be fun and not a reason to stress out.