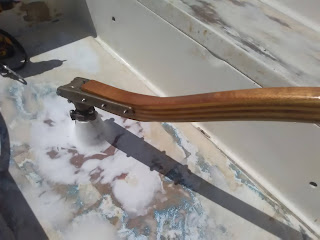 The Pearson 35 is known for its unique wheel pedestal position, located forward in the cockpit rather than aft, almost pressing up against the companionway. This was because the Pearson 35 was originally designed as a yawl, since CCA racing rules back then didn't handicap or penalize a boat with a yawl rig. Unfortunately the position of the steering wheel blocks access to to companionway a bit.

Also, as an often single-handed sailor, I was more comfortable with a simple tiller steering system which avoids all the potential problems with steering wheels. Crawling around under the cockpit sole, trying to fix a snapped steering wheel connection is not fun or safe.

That, and the fact that I simply prefer tillers on sailboats (they provide much better "feel" and feedback of how the boat is progressing in the water) made me determined to get rid of the wheel and put a tiller on my Whimsy.

This project was actually not too hard, mainly thanks to the emergency tiller that I salvaged to create a rudder post extension, but also generally due to the fact that the boat seems to have been actually designed for tiller steering, and the steering wheel idea was apparently an after-thought by a manufacturer who was watching the fashion trends...? The location of the emergency tiller made a lot more sense than the location of the steering wheel, but wheels look more "yachty" I guess. However, all of that creates additional weak points in the boat's steering system that can fail, and clutters up the cockpit too. My goal was the reduce clutter and potential weak points, so the steering wheel had to go.


This project involved first removing the wheel pedestal and fixing the rotted cockpit sole around the penetrations through the fiberglass/balsa core.

Also, the "guts" of the steering mechanism had to be removed, including the steering wheel chains, steering quadrant, sheaves, pulleys, chains and cables. I managed to get everything out except for two pulleys which are bolted and glassed in. I'll wrestle with them later when I install the autopilot.


Next I removed the inspection port that covered the rudder post below the cockpit sole. This is where the emergency tiller attaches to the rudder, in case something goes wrong with the steering wheel mechanism.


The top of the rudder post was just a few inches below the cockpit floor, so in order to attach a tiller arm to this post, first an extension had to be connected to it so it could be raised above the cockpit sole. Also, this extension had to pass through a cylindrical shaftway made of fiberglass, to support it.

Whimsy came with an emergency tiller, a heavy 2"-round piece of pipe made of naval brass with a 45-degree angled end that forming a square socket. This was meant to slip over the top of the rudder post, giving the helmsman direct control over the rudder in case there were any problems with the steering wheel. The emergency tiller head also had two set screws that, when tightened, would prevent it from slipping off the rudder post. However, since the screws were made of steel, they were hopelessly corroded and stuck.


Since the emergency tiller head had a socket that was already designed to fit over the rudder post, I cut it off and had it welded to an 18"-long piece of round stock made of similar naval brass and with a matching 1.5" diameter, which I ordered from Online Metals. This was my rudder extension post which raised the tip of the rudder post from a few inches below the cockpit floor, to about 9" above it.  (The exact height was left to be determined later, when I got a tiller and practiced using it in the cockpit space to get an idea about its ideal height position before I trimmed down the rudder extension) There was a little play in the socket connection over the rudder post, so I slipped a couple strips of scrap counter-top laminate material  into the joint, and kept them in place with blue tape as I slid the extension piece over the rudder post. No, I'm not worried about the durability of the tape, since once the socket was slipped over the laminate pieces, they weren't going anywhere.

While I had the welders busy on making the rudder post extension using the emergency tiller head, I slipped a piece of PVC piping over the rudder post to act as a temporary extension, thus ensuring that the proper angle with the cockpit sole would be maintained as I built the fiberglass shaftway that would support the extended rudder post.


I built the shaftway using a large plastic cup as a fiberglass mold. This too was made initially taller at first, and trimmed down later when I decided on the best positioning with a tiller.


Next, I bought a bronze Edson tiller head assembly. This has a socket that fits on top of the rudder extension post, and has two tangs or "arms" that hold a wooden tiller arm. I was also lucky to find a wooden laminate tiller arm in very good condition and at a good price at Sailor's Exchange. I only had to trim it about 3" to get the length just right.

I also bought a stuffing box, to go around the rudder extension and ensure that no water would leak below.

I used the wooden tiller as a prop and tried various heights for the tiller head, to determine the best height. I trimmed the rudder extension post and had a new keyway cut into it. After that, it was simply a matter of plopping the Edson tiller head over the now much shorter rudder extension post, and attaching the wooden tiller arm to the tiller head, then trimming it too so it swung freely in the cockpit, over the seats. 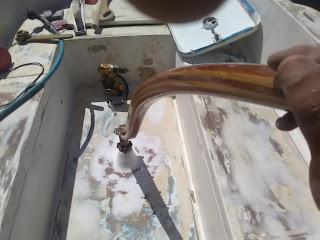 I also too opportunity to repack the rudder post stuffing box. After digging out the old stuffing, I used a split piece of PVC tubing that was held in place around the rudder post using a hose clamp, to force the new stuffing up into the stuffing box. I guess we'll see how well I did in repacking this stuffing box when the boat is launched. 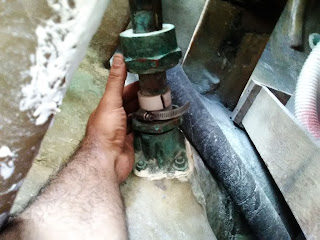 In the future, I will be installing an autopilot that connects to the rudder post using a bronze tiller arm below the cockpit. I have the bits and pieces for that project already, just need some time...
Posted by SV_Whimsy at 8:34 PM