My Pearson 35 came with a very large anchor locker that unfortunately drained into the bilge. Access to the anchor locker was by a hatch in the v-berth. None of this arrangement was very practical. I decided to seal that hatch, make a new hatch on deck, and redesign the interior of the anchor locker to hold two anchors as well as provide convenient storage space for dock lines, fenders, etc. 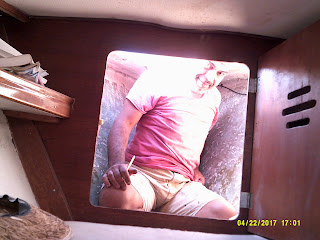 First I had to cut out the anchor locker hatch or lid from the deck top. Part 2 is about the interior work inside the anchor locker, including dividing the space, building a shelf and cutting drain holes.

The location of the hatch was about 3 inches forward of the anchor locker bulkhead, with sufficient clearance for cleats on the sides, and for the windlass and bowsprit. I drew a couple of outlines of hatch shapes and locations until I settled on one that seemed most practical.  I sat on the deck, placed my feet where the cleats would go on the two sides of the locker lid, and pretended to be hauling up an anchor to make sure that the location was appropriate. 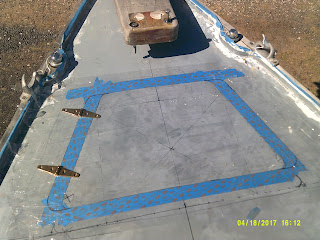 Using a black marker, I drew the outline of the hatch on the deck to provide a guide for cutting. I had to be real careful because I didn't want to make a brand new lid for the anchor locker hatch, but planned to use the cut-out piece of deck material itself as the lid. My friend who is a professional boatbuilder did the actual cutting, just to be sure, using his Festool.  The boat deck has a camber to it, higher in the center and curving down towards the the sides, so the hatch had to match that curve and I was not about to spend the time to make a new anchor locker hatch which matched that curved deck shape.

But before I started cutting anything, I had to make the lip that would fit beneath the lid to support it and prevent it from falling down into the its own hole. Since the deck had a camber to it, this lip had to also match that curve of the deck.

Then I laid two layers of thick resin-coated fiberglass roving mat strips, about 4 inches wide, over the outline of the hatch lid, making a rough trapezoidal shape which matched the shape of the hatch outline, and also had the camber of the deck. Once this had cured, I was able to easily pry it off the surface of the deck since the fiberglass could not bond to the plastic tape beneath it. Sorry, no pictures of this process!

To prevent moisture intrusion, I dug out about half-inch of the balsa core around the hole and around the new lid, and filled the gap with a thickened mixture of epoxy and filler. Once this had cured, I sanded down the edges of the hatch to even it out and make it smooth. (I used epoxy rather than polyester along the edges because I wanted to strengthen the hatch as much as possible, even though I new that epoxy may cause problems with gelcoat later.West assures everyone that you can indeed gelcoat over their epoxy if it is properly mixed and cured. Many are doubtful but I tested things and indeed gelcoat seems to stick fine to epoxy.)

To put the lip in place that supports the hatch lid,  I trimmed off and cleaned up the excess fiberglass material from the trapezoidal-shaped piece that I had layed-up earlier so that it roughly matched the shape of the hatch. Using epoxy and milled fiberglass adhesive filler, I glued this piece beneath the hatch cut-out and held it in place overnight with clamps. The next day, I further trimmed it back with my grinder so that about 3/4" of it stuck out to provide support for the hatch lid and prevent it from falling into the anchor locker, and glassed over it with another 2 layers of 1708 biaxial.

Attaching the hinges involved the usual process of making bolt holes in cored decks to avoid water-intrusion: mark the intended location of the bolt holes, drill a slightly larger hole through the deck, dig out about half-an-inch of the balsa core from around the hole (I used the old "bent nail in a drill" technique to do this), vacuum the hole out, put a piece of tape under the hole and then pour fiberglass resin into the hole from the top (I like to just slightly thicken the fiberglass resin with structural filler, while keeping it still runny and fluid. See below for explanation.)  Over-filling the hole so that a dome of resin forms over the hole is a good idea, since there may be shrinkage as the fiberglass cures, or as the fiberglass resin gets absorbed into the surrounding balsa core inside the hole.

Once the fiberglass has cured, I sanded down the fiberglass flush. Drilling a smaller hole directly through this plug for the hinges, ensures that no water can reach the balsa core around the hole. 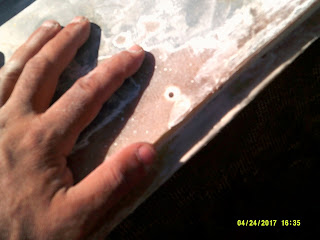 It is normally recommended un-thickened resin be poured into the bolt holes. However plain resin may crack when subject to pressure, allowing water intrusion. Mixing up a small amount of structural filler with the resin would minimize this, however you can't mix too much filler since then it won't flow properly, and may leave unfilled air pockets inside the drilled holes. That's why it is always a good idea to poke a toothpick into the hole while filling it, to remove trapped air bubbles. 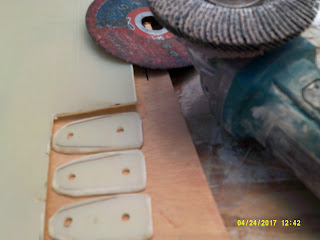 Since the rest of the boat hatches used brass hinges (except for the new propane tank locker) I decided to use heavy-duty brass strap hinges on the anchor locker hatch. Since I was not able to locate large brass fender washers quickly, I made some backing plates for the hinges from G10 board. I don't expect the hatch to have to hold a lot of weight or anything, but I didn't want to "mix metals" by using stainless washers with brass nuts and bolts. The G10 is great for backing plates because it is of course non-conductive yet super-strong and can be cut and shaped with a grinder easily.
Posted by SV_Whimsy at 6:21 PM