At some point Whimsy had a propane stove, based on the stove gimballs as well as the hole in the galley-side bulkhead for a propane gas line. However there was no dedicated propane tank locker, which leads me to assume that either the propane tank was mounted above-deck, perhaps attached to a stanchion, or more likely the tank was located below deck, inside the port cockpit locker  (this is in the days before the ABYC code, which now requires a dedicated locker for props e tanks stored below deck.)

Naturally I want to do a lot of cooking aboard but I don't want to have propane tanks hanging around outside, off the rail or stanchions, just waiting to be washed away by waves and generally making my boat look bad. So I decided to make a dedicated propane tank locker which is fully compliant with the ABYC code.

I chose to put the locker under the port-side aft-quarter of the cockpit seats. There was mostly wasted space below the seat there, and a convenient place for the propane tanks. Based on my measurements, I could fit two 10-pound tanks into the space, while having enough free vertical space to allow the locker to vent overboard well above the waterline as required by the ABYC.

However, it was going to be a tight fit horizontally, especially as I didn't have a lot of space to create a hatch out of the seating area above the locker. The tank itself was 11-inches in diameter (I rounded up) but the seat was an irregular curved shape that just barely provided enough surface space to cut out a hatch that was large enough to let the propane tank pass through, plus a 1-inch gutter around the hatch to collect water and prevent it from entering the locker (where it could corrode the tank and fittings, even though it would also drain out the vent.)

The locker itself was is integral to the hull. It basically consists of 5 pieces of marine-grade plywood sheathed in fiberglass which form a box under the cockpit seat. The "ceiling" of the locker is the cockpit seat, the bottom of the locker is a panel shaped to conform to the sloped hull and hold the tank upright, and consisted of several pieces that fit together like a 3D jigsaw puzzle. The vent for any leaking propane to escape through, is a 1/2" hole cut through a corner of this box, right through the boat hull. There's no hose connection. The vent is located 5 inches above the static waterline externally.


The ABYC has code standards on the various designs of propane tank lockers. Generally they require a vspor-tight dedicated contsiner with top-opening hatches or lids and that have a vent to drain any leaking propane overboard. The code allows for tanks to be located above-deck (which makes them vulnerable to waves, and looks messy) or in specially-designed but quite expensive sealing boxes that can be placed inside a cockpit locker below deck. Since these boxes are airtight, vented overboard, and their sealed lids can't be opened without the cockpit locker itself being opened to the outside air too, they are deemed acceptable. What is not compliant with the code but apparently popular with boat designers are side-opening propane locker hatches, which would spill any leaked propane.

I went with the preferred design for a propsne tank locker, which consists of a dedicated locker space below deck that has a hatch which opens directly to the air, and vents overboard of course.  The ABYC has specified in more detail what a compliant propane tank locker like mine requires:

1- It has to be dedicated to propane tanks only, nothing else can be stored in there.

2- The tanks themselves have to be secured and strapped down. I could have gone with one vertical tank but decided on two 10-lb tanks instead, for ease of transport and refill.

3- The locker has to be vapor-tight, so no leaking propane can get into the boat ( propane is heavier than air, so it will tend to accumulate in the bilge,  and then possibly explode when you start the engine.)

4- There has to be a min. half-inch vent that directly drains any leaked propane out of the locker and overboard, above the static waterline (and 20-inches away from any other hull penetration where propane may sneak back in.)

5- Use only approved flexible gas supply hose and connections (or copper pipe, but not in my case) which are supported along the runs, and protected from chafe

7- The gasketed hatch has to open to the outside air, and have a latch. I don't have a latch, just a lifting handle. Gonna have to fix that. It is not as easy as it sounds since the latch will have to be recessed. I may get a nice bronze one to match the rest of the old fixtures in my cockpit if I can find it.

8- There has to be a solenoid to keep the gas supply off at the tank until needed.

9- there has to be a pressure gauge, not to measure the amount of gas left in a bottle (the pressure would remain constant until the bottle is near empty anyway) but to check for leaks.

So once the hatch was cut out from the seat, I had to make the gutter to fit under the edges of the newest hole in my boat. This gutter collects and drains any water that may fall on the propane tank locker hatch (rain, or waves.) Designing it was kinda tricky because among other things, the cockpit seats are not "flat" (parallel to the floor) but instead have a back-leaning, knee-raising angle (like any well designed boat should,  so that occupants can sit more securely on the cockpit seats in a heeling sailboat)  so the gutter had to be angled forward to drain water at one particular deep corner, where I cut  a drain hole into the footwell.

The other problem  was with the width of the gutter: the cut-out space needed to for the propane tank didn't leave a lot of space for a gutter to be placed around the hatch too (plus hinges) so the gutter around the hatch was made narrower than what I would have liked, and so I can't easily clean it out of debris such as fallen leaves with a simple finger-swipe as I can the gutters of the locker hatches, so the gutter and its drain can clog and force water to drain into the locker itself. This is a small annoyance, since like I said any water that finds its way into the propane tank locker would drain out the vent hole, though I'd rather not have too much water get into the locker and cause corrosion.

To make the gutter, I drew the shape of the lid and made matching mold using MDF board and gelcoat. The MDF board was then covered in tinted gelcoat, sanded smooth, and thoroughly waxed with mold release wax. This formed the mold. 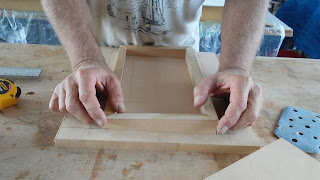 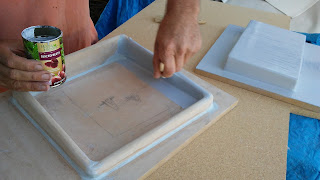 Then a new white layer of gelcoat was spread over the mold (this would form the exterior of the gutter, so it is already gelcoated once popped off the mold) followed by several layers of fiberglass mat with polyester resin (polyester allows the mat to have better shape conformity than epoxy.) 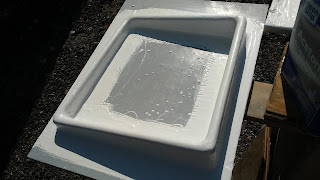 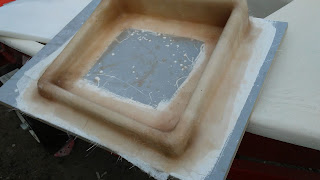 After a few hours, the gutter was popped off the mold, and epoxied under the newly-cut hatch for the propane tank locker. 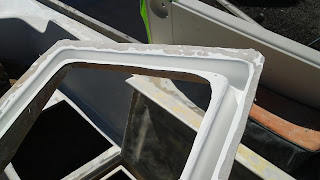 More pictures and detailed explanations will be provided in a post about the new instrument panel which was made at the same time using the same process.

The gutter was angled so that it drained water towards a drain hole in lowest corner, and into the footwell. If I had to do it over again, I'd make the drainhole larger. In fact, I may do so now, since it is already hard enough to clean out the gutter.

I still have to finish the project by gelcoating the interior and exterior of the propane locker, change the hatch lift handle into a latching one, install straps to keep the propane tanks secure inside the locker, and mount the regulator, hoses, pressure gauge etc. and then run the gas hose to the galley where I hope to install my cooker soon! See part 2
Posted by SV_Whimsy at 10:24 PM