My fat, useless NYC apartment cats are getting used to the boat and boatyard life. This is the second time that they're here in Florida on my boat. so they were familiar with the arrangement from their first visit last year.
Upon arrival, they initially ran off to hide in their favorite spots onboard but gradually started adjusting...well, Pasha more so than Sasha. Pasha has started to wander around the boatyard and has even brought home a couple of "presents" for me: half-dead, Florida boatyard-sized cockroaches that he placed on my pillow while I was half-asleep. Exciting things happened after that. But yesterday he brought home a little bird too. I was kind of proud of him, and happy that his cat instincts were still sharp enough. I'm hoping the little bell on his new collar will prevent any more successful bird-hunts.

Sasha is another story. She refuses to got out of the cabin, and only lounges on a settee all day, demanding food and regular petting sessions. She's gotten quite fat too; I am concerned she may be diabetic so I've decided to cut way back on the dry food for both of them, and will perhaps switch to human food with more protein for her. I once caught a catfish for them which they ignored. I can't carry a lot of canned catfood witth me once at sea, so they're going to have to learn to eat fresh fish too.

I have been encouraging them to get around a bit more by moving their food plates out of the cabin and into the cockpit, along with their litter box, but the wet weather has not been cooperating - rainwater gets into their litter. On dry days, Sasha is willing to go out to eat and use the litter box, but will rush back inside the cabin again.

I got them each their own little plush cat house so they have a place to stay warm and feel secure too but when the temperatures fall, they prefer to climb into the sleeping bag with me, and since they're warm and fluffy, I don't mind either. It has been quite chilly for NE Florida recently. 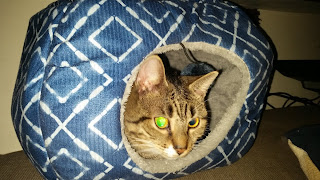