Installing a Dorade box vent on my sailboat

Adequate ventilation inside a sailboat's cabin is a must, whether in the hot tropics or colder climates where condensation becomes a problem. Being stuck inside a hot damp boat interior with no fresh air circulation is a miserable experience especially on passage, or even on a rainy day at anchor, when opening the portlights or top hatches is not an option. 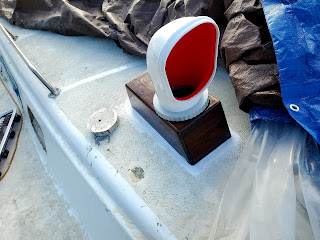 Whimsy will have 8 opening portlights (7 on cabin sides and an aft-facing one over the galley sink) but because boats tend to point into the wind, cabin-side opening portlights are generally not as effective in promoting air flow. A forward-facing portlight is also not an option as the force of waves crashing over the bow can possibly stove-in the area, not to mention the leaks. The solution is a Dorade box vent. 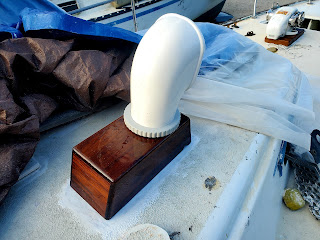 Dorade vents are named after the Olin Stephens-designed sea-racing yacht Dorade built in 1929 when the Robber-Barons took up pleasure sailing, which is surprising because it seems like such a simple solution to a common problem that should have been invented much earlier: how to get air ventilation below deck without letting water in too. 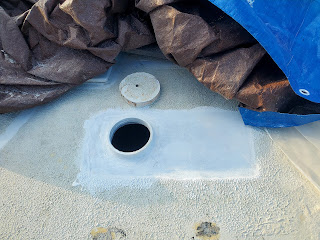 A Dorade box vent basically consists of a rotating cowl that can be pointed into the wind, attached on top of a teak box that has an internal baffle,  which is placed over a hole on deck. The idea is that the internal baffle will keep out most of the sea spray and rain, which drains out from the bottom of the box, while the air moves over the baffle, down the hole & into the cabin. 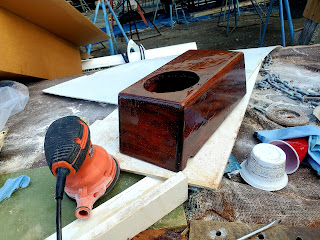 Getting air into the cabin is part of the deal; there also has to be adequate air exhaust routes for proper ventilation to occur. A Dorade box cowl can be pointed away from the wind too, creating negative pressure that will tend to suck air out of the cabin. This is why larger boats can have pairs of Dorade box vents: one facing fore and one facing aft, creating a continuous draft through the boat interior. 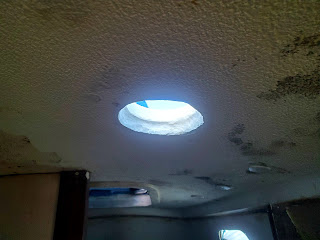 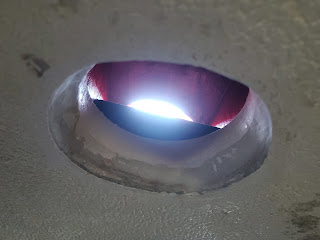 Parts for this project consisted of an off-the-shelf teak Dorade box, a cowl whose base just barely fit over the box, and a ring cut off of 5"wide PVC pipe. 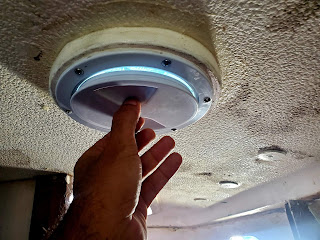 The cowl is the most problematic part. One of the issues with Dorade box vents, other than their primary drawback which is taking up large tracts of deck space, is that the cowl can be a nuisance, fouling lines and banging shins. Traditional Dorade box cowls are fancy highly polished, hard metal objects with sharp edges that look pretty but a jibsheet caught around a Dorade box cowl can potentially rip it right off, and I'd hate to trip onto a cowl. Traditionally the solution was to build a steel cage around the vent to prevent all that, thus taking up yet ore space and not reducing trip hazards.

Manufacturers came up with PVC cowls that are flexible enough not to foul lines and to not cut you open if you should fall on then, but the general consensus is that they don't fare well under the sun and also tend to stain, turn yellow or mildew. Vetus however has come up with soft but rigid cowls made of silicon, which supposedly fares better than PVC under the sun. I guess we'll see but the material doesn't feel floppy as I had feared.  Anyway I got the biggest cowl I could find to maximize airflow: the Vetus Samoen cowl with a gaping air scoop painted red and 5"-wide opening hole on the base.

The installation of my Dorade box vent was pretty straight-forward as there aren't too many places to install one on deck. I was most concerned with making sure it did not interfere with any lines running aft to the cockpit. Then, installation was simply a matter of cutting a 5" hole on deck, and a slightly larger hole from below (for the cover plate). I went through the usual process of scooping out the balsa core material and filling the gap with epoxy filler. I had cut off about  2" length off of a 5"-wide PVC pipe to make a plastic ring; this was installed over the deck hole with about a 1" tall lip sticking up, acting as a dam to further limit water intrusion around the deck hole. Then a few coats of gel coat, and the quickly "varnished" teak box was stuck on the deck top with 3M 5200 only (I don't see any reason why it would need to be more securely fastened on deck, and additional fasteners just mean more holes for water penetration.)

To close up the Dorade box vent from below, a 5" (internal diameter) waterproof plastic deck plate was installed from the interior under the hole.

I decided to varnish the teak box. Though teak tends to be naturally weather resistant, I was concerned as the boards used to make my Dorade box were kinda thin, and so could use protection. I also like the glossy look of varnished wood. The quick-and-dirty varnish job was just two coats of epoxy (first one was Totalboat "penetrating" epoxy, as teak tends to be oily & not stick well to epoxy resin) followed by two coats of Interlux Perfection Plus to give it a glossy look, as well as to protect the epoxy from the Sun's UV.  The final coat was a spray of glossy acrylic from a can with additional UV inhibitors; not strictly necessary but helped deepen the gloss.. Of course there are drips and dust specks galore; I am working in a dusty boatyard.

So, now Whimsy has pretty much maxed-out the natural ventilation options. Combined with multiple fans, there is not much else that can be done to improve ventilation below, but for a small screen on the cowl to keep out bugs.