The interior of the cabin side over the starboard settee was bare fiberglass when I got the boat; there was only a splotch of gel coat. I had considered many options to cover up the area including just sanding it smooth and gel coating or covering it with the vinyl but I decided ultimately to do a proper job of insulating the hull, and again "might as well" do the v-berth too later. I don't expect to sail a lot to cold places since I hate the cold but since I have access, and may one day want to go to the Pacific Northwest, I might as well insulate now to minimize condensation. 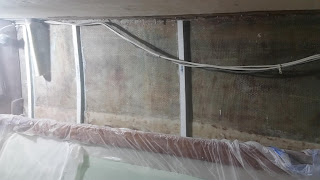 It wasn't a complicated job. First, I had to strengthen the knee where the chainplate attaches. Then furring strips made of 1" by 3/4" lengths of PVC trim bought from the hardware store was cut to length (about 2 feet) and sanded to provide some "tooth" and remove the smooth surface, wiped down with acetone and stuck to the hull interior vertically using fiberglass filler (I had to hold them in place by hand for a few minutes each until the filler hardened.) 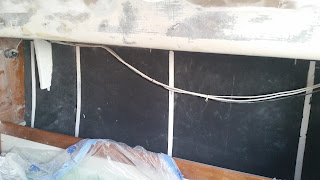 Next some closed-cell foam insulating sheets (3/4") were stuck to the hull between the furring strips using contact cement and I used a bottle to roll over the foam to make sure it got a good contact with the hull surface, in order to make sure there were no air gaps where condensation (and mold) can accumulate. Later, I covered the furring strips themselves with some neoprene tape though I don't think that was strictly necessary. 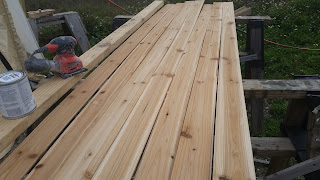 Next I got some cedar tongue-and-groove boards that are used to line closets, stained and then sealed them with a few coats of gloss lacquer (which dries much faster than the traditional epoxy-varnish thought it doesn't  result in as hard a surface -- the weather was too wet and cold for that), cut them to fit and screwed them into the furring strips using some brass slot screws (thank you Mike at Sailor's Exchange!) with finish washers. 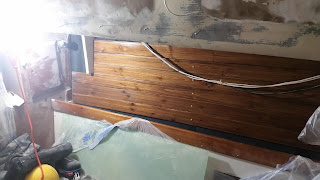 The project isn't totally done -- I have to to the top row of cedar planking still but I'm going to put that off until I re-bed the jib track screws that are around there but otherwise that's one thing checked-off the to do list!

I will have to insulate the rest of the boat later -including the v-berth - and I have bought a couple of rolls of closed cell foam that is 1/2" thick with an aluminized/mylar face on one side, which I will be gluing onto the interior "ceilings" of the closets and cubby holes. The mylar will help reduce the "solar gain" from above
Posted by SV_Whimsy at 5:49 PM