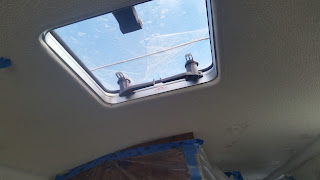 I went with Lewmar hatches, to stay consistent with the Lewmar portholes I will be also installing. The forward hatch is a Lewmar Ocean 60 which is just about an inch smaller than the existing deck hole for the forward hatch, and the aft hatch located under the boom will be a Lewmar Ocean 40 which is just about an inch larger than the existing hatch hole. A Lewmar Low Profile size 20 hatch will go over the head compartment. The hole for it will have to be cut out of the deck since there's no hatch or ventilation there already (a decent sized opening porthole in combination with the hatch, should keep the head quite well-ventilated.) 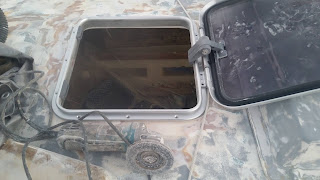 Since the aft hatch was going to be easier to install (simply enlarge the existing hole, rather than make a larger hole smaller, or make a new hole) I started with that one. The process was simple: I made a pattern from the new hatch out of cardboard, and transferred the outline to the deck top, around the existing hatch frame. It was obvious that the whole frame had to go, so I cut it off with an oscillating tool (I started with a smaller tool, but after having to repeatedly re-tighten the blade, I brought out the Makita oscillating tool to finish the job.) 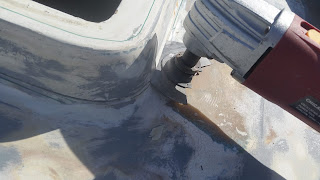 Once the old hatch frame was cut off, you could see the gap between cabin liner and the external deck. I put some off-cuts of foam and wood in the gap, and filled it all with filler which I then sanded smooth and flush with the deck top. 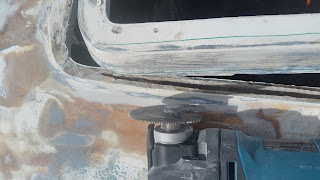 Then, it was simply a matter of finessing the fit of the hatch flange into the newly-enlarged hole. I had to sand down a couple of places around the new hole but the hatch flange dropped into the new hole without much trouble. The good thing was that since the new hatch is not much larger than the old one, I don't have to do a lot of fairing and finessing of the interior area around the hatch -- the hatch fills the pre-existing interior hatch frame in the ceiling quite well.

Since the decktop is cambered, there is a slight gap of about a half-inch on the sides of the hatch frame with the deck top that I will have to fill-in with shims that are glassed in place. I also have to drill the screw holes for the new hatch, making sure to fill over-sized holes with resin to prevent any water intrusion around the new screw holes. I also have to cut the 4.5 inch hole for the solar vent in the center of the hatch plexiglass.

Next, installing the forward hatch.
Posted by SV_Whimsy at 6:05 PM